The warm glow under a duvet brings me back to my own childhood where I remember becoming lost in the words that filled the pages of my favorite books. Now over 20 something years later I am standing at the doorway of Hailey’s room, silently watching the glow move slowly as she turns the pages of her own favorites. Despite the late hour I leave her room as quietly as I entered, she too has become lost in a sea of words and imagination. Later I will go in to turn off her little flash light, put her books away, kiss her sleeping face and tuck her in goodnight.

I have read a great many books in my time; as a child, as an adult and now as a parent. I think one of the nicest ways to spend a while with your little person is to read with them; creating memories and favorite books all the while. For a great many nights of late I have been carefully lifting a very familiar set of books out from under Hailey’s little arms as their owner sleeps the night away. I carefully put her books away as I know first thing she will want to look at them again.

A little boy called Freddy Buttons has become Hailey’s most favored late night literary companion. Freddy is an 8 year old boy grown freshly from the imagination of Author Fiona Dillon. Freddy lives in Tumbledown Cottage with his parents; Ted & Kitty Buttons together with his best friend in the whole world Juno the dog. 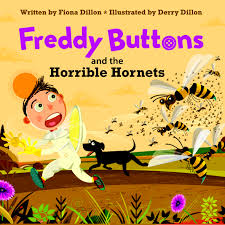 Author Fiona Dillon together with Illustrator Derry Dillon bring to life the character Freddy Buttons together with all who inhabit his world. Fiona is a Food Blogger and is also the Author of “Food from an Irish Garden”. Fiona very kindly sent on  the complete first series (published by Orpen Press in June 2015)of her Freddy Buttons Tales to Hailey, Conor and Jack to enjoy.

There are six titles in Fiona’s first series of exciting page turning – can’t put down til the end- adventures. 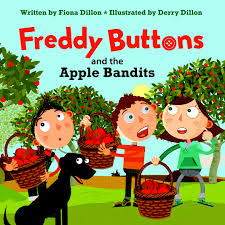 Vibrant colors and characters fill each of the pages of the six Books in Series 1. Freddy is the protagonist throughout all six and is accompanied on his adventures by his school chums and animal friends. We first meet his family at the kitchen table in Book 1- Freddy Buttons and the Little Lost Hen together with his animal friends. With friends like Major Prickles (the Hedgehog), Mahatma Gander and Willow Goose together with Lissy the cat it is easy to understand why Hailey, and especially Conor loved the reading of these texts.

I read each of the books for the children just over the space of a week; Hailey was the most interested of all 3 in the books. Her favorite character outside of Freddy the protagonist is Major Prickles. She would take to a fit of giggles when i would read his name to her lol! She thought it was the most hilarious thing ever. Conor really loved looking at the pictures on each page. He is unable to read just yet but enjoyed the steady rhythm of the words as I read them to him. He would take a book after the reading, looking over each page with keen interest paying particular attention to Freddy Buttons and the Apple Bandits. He is a huge fan of eating apples in general so it was great to see he could relate and transfer what was familiar to him in the text. 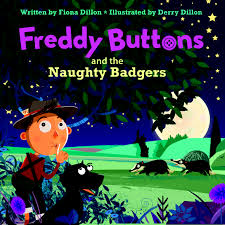 A great many children with Autism lack an innate imagination and find it very difficult to relate when reading/listening to  fictional texts. I found Conor really understood what the story was about and would laugh at the funny things that happened in the stories. It helped him to have concrete ideas about each Books themes. Given that Conor is 5 and has special needs he would not be able just yet for the book on his own but was more than happy to listen as I read. I encouraged him through out the reading to point out different animals/insects, fruits and vegetables in the texts as I read to help him understand what was happening and to make sure he could follow.

Baby Jack as always grabbed a book for himself and ran off to his own quiet spot, when I looked in on him he was lying on his little tummy turning the pages of Freddy Buttons and the Horrible Hornets. As Jack like Conor is unable to speak I judge what he likes and dislikes by his facial expressions and behaviors. He spent ages looking through the book only leaving it when he wanted a drink. Freddy Buttons and his Adventures get a big thumbs up from Conor and Jack.x

Given that the texts are aimed at children Hailey’s age I am not surprised she is so taken with the texts. When I read to Hailey she was able to take part as through out the texts we see the characters speaking to each other through speech bubbles. She would get very excited when it would be her turn to “speak” through the characters’ speech bubbles. Her favorite book of the series is Freddy Buttons and the Slimy Slugs primarily because she knows her mammy is afraid of slugs (true story lol!) so she would say to me as I read “uh oh!!! here comes another slimy slug” ! She really liked the idea that Freddy went off to school with his friends but didn’t realize he was being followed by his animal friends close by. 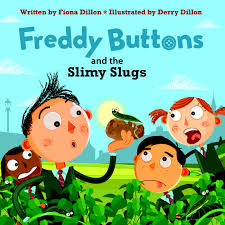 Another great facet of the Book Series is that each book has a recipe you can try that relates to the Book’s theme and there is also a page filled with factual information relating to the chosen theme for each book. As Fiona collaborated with the super tasty Glenisk Yogurt when creating her texts, each of the fab recipes uses some of the Glenisk family products as part of the ingredients.

I found myself getting lost in the texts and wanting to find out what happened next. Freddy had great help through out the text solving problems with the FBI – Freddy Buttons Investigators. Each of the texts can be considered a stand alone text that is easily to follow, rich in imagination, character, and plot with it’s wholesome food themes always subtly at the fore . Yet equally as interesting when read as part of the six book series. Having read all the books in just over a week, I have to say we were still all very interested in what would happen in the next book and what the characters would get up to. I am an adult and I was so looking forward to finding out what Freddy and the FBI would get up to next.

When we finished the final installment of the six books Hailey went looking for the seventh and was aghast when I told her we had to wait for Fiona to write more!! She soon got over it though when I told her there was a Freddy Buttons Website which you can find at www.freddybuttons.com where you can write to Freddy yourself and also find out more about the characters.

Hailey has since claimed the Freddy Buttons series for herself. Having scooped up Freddy’s books again tonight from her sleeping arms I can tell you that the Freddy Buttons Series is a MUST read! Highly entertaining, educational fun for all the family.xx

A huge thank you to Fiona for your kindness in sending on your fab Freddy Buttons Books. We can’t wait til the next series comes out.xx

Disclaimer- Hailey, Conor and Jack received the Fab Freddy Buttons Books as a free gift from the super talented Author Fiona Dillon. The above Review is honest and the opinions contained therein are my own. xx

Freddy Buttons is now a firm family favorite in our house.xx